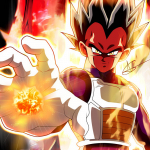 Thank you for your contributions thus far! I'm sorry for my sparse activity; I've been busy with my life and other projects, but I'm happy to see someone else take even the smallest interest in this wiki. Your efforts have been appreciated!--—Mina Țepeș

Sorry about that, the correct ones to work with are Caulifla and Kefla. It's just, one of our former admins made a mistake when translating their names and believed "Cauiiflo" (and therefore, Kaflo) was correct. Since we kept his mistake around for so long, even though I've tried fixing it in places, it's probably still around.--—Mina Țepeș

It would appear to have been both. Regular Blue and Completed Blue were both used, it would seem. I'm not 100% on board with it, but given that Completed Blue's signature is a lack of aura, it'd make sense. Granted, since so many fighters in the anime and manga fight with and without an aura, it makes it hard to tell. It was never confirmed, our founder merely used context clues when making that decision. For now, leave it be.--—Mina Țepeș

Retrieved from "https://dragonballuniverse.fandom.com/wiki/User_talk:Paleomario66?oldid=118463"
Community content is available under CC-BY-SA unless otherwise noted.